In this beginner workout we target major muscles throughout the body to get the most out of each exercise. Utilizing beginner friendly movements, this video can be used just as easily by the advanced exerciser as it can by the beginner.

Each exercise can easily be modified for beginners by limiting range of motion and/or modifying form to create less leverage. For the example of leverage change we can use the push up. To make this exercise easier simply perform the exercise from the knees and hands or leaning against a wall or high counter for a very simple motion that almost anyone of any fitness level can do.

An example of limiting range of motion can be demonstrated with a traditional squat. To make this exercise easier simply limit the range you move by only squatting down a few inches rather than trying to get your hips all the way down to knee height.  As you become stronger you can always add more range of motion in to each repetition.

This routine can easily be modified to become harder than we show as well. Again using increased range of motion and added leverage can change the difficulty of all of the exercises used. Again using the example of a push up; this exercise is done traditionally by performing the motion from your hands and toes but can also be made even more difficult by keeping one foot up off of the ground. The wider you set your feet the harder the exercise becomes. And if that is not enough then using extra weight in the form of a weighted vest will also drastically increase the difficulty of this exercise.

With the example of a squat, it is traditionally done with the intention of dropping the hips down to knee level. You can increase the difficulty of this exercise by increasing that range as long as it is comfortable for you and you can keep your back flat. You can also modify form to use only one foot at a time. Squat down with one foot  and use both to come back up or use just a single leg for both the downward and upward motions. If that is still not enough to challenge you then you can always use extra weight in the form of dumbbells, medicine balls, barbells, etc.

Though the above examples are only two of the exercises used in this video the same principals can be used to modify every exercise used.  Be sure to pay attention during the video to the explanation of how to modify each exercise.

Warm Up
We will do 10 different positions/movements for 30 seconds each for a total of 5 minutes. There is no pause or rest in between each movement.

Workout
We will do 8 exercises in groups of two in an AB, AB format, completing two sets of each exercise before moving onto the next group of two. Each exercise is done for 45 seconds with a 15 second rest in-between exercises and groups.

Supine Push Up
Side Oblique Crunch with Leg Raise (Left)

Cool Down
For this section we will be holding stretches for 30 seconds each and we will be moving from one stretch to the next without any extra rest or pause.

If done exactly as we have shown this video can be expected to burn 6 calorie per minute on the low end and 8 calories per minute on the high end, including the warm up and cool down. This gives you a total calorie burn of 158 to 232 calories for this video. Remember the harder you push yourself the more calories you will burn. 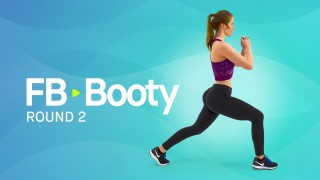 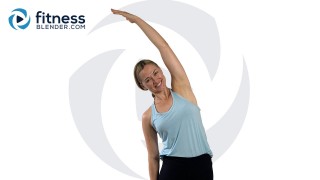 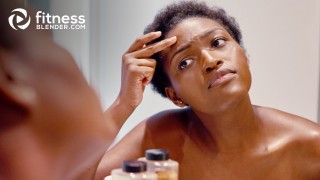 Rethink perfectionism by practicing self-compassion and finding power in your perceived flaws and imperfections.