This routine started off as one that was intended to really target those glute and thigh muscles. However, as it developed it became a workout that was very dynamic in that not many muscle groups were spared with the exercises that we used.

The 26 minutes of this routine will definitely get your heart rate up, almost as if you were doing a full blown cardio workout. The best part is that while you are burning calories as if you were doing cardio, you are doing movements that require functional strength and agility, so you are toning up at the same time.

We recommend that you do 5 minutes of warm up cardio before jumping into this workout.

Exercises
• Burpees with Side Leg Raises – Start in a standing position and shoot your feet backwards to go down into a full plank, then bring your feet back up to your hands, stand back up (as you would with a burpee), but instead of jumping upwards do a side leg raise with each leg. Balance, core strength, control over your own body, and a decent cardio threshold are all “must haves” for this move. We could list the muscle groups that it targets but there really aren’t many that it doesn’t engage.

• Ski Squats + Windmill Steps – Hold onto weights to make this one more challenging for your upper body (water bottles would work – you do not need much extra weight for this). This motion is similar to a slow-mo jumping jack, except that you have a Ski Squat (feet planted close together) in the center, and steps out to each side instead of simultaneous hopping of the feet apart. This is a great move for the glutes, inner and outer thighs, and upper body.

• Boxer Squats + Flutterkicks – Squat down and transfer your weight from one leg to the other as if you were ducking down to go underneath something. Once you get to the other side, stand up straight and do four hops of a “flutterkick” (jumping, switching which foot is in front of the other each time) before going back down into a low Boxer Squat.

• Twisted Mountain Climber + Leg Lifts – From a full plank position, hop and bring both feet up to either side of the body. Hop back into a full plank, then bring your feet up to the other side of your body. Return to a full plank, and then do a reverse leg lift on each leg before repeating the whole sequence over again. There are really no muscles that wont be crying out by the end of these 50 seconds.

• Bridge with Kicks – Lying on your back with your knees bent and feet on the ground, press upward through your heels to raise into a Bridge position. As soon as you reach the top of the motion, kick one leg out straight. Drop back down to hover over the floor before going back up into a Bridge and kicking with the opposite foot. You will feel this in your glutes, hamstrings, quads, abdominals and lower back.

• Double Jack Squats – Do 2 Jumping Jacks, and then jump forward into a squat. This is a very effective combo of a great bodyweight cardio exercise and one of the most effective lower body exercises out there.

• Crossover Toe Tap Leg Lifts – From a full push up position, do two leg lifts; one that is straight up, and the other that comes back down to tap the ground on the outside of the opposite foot. Once you have done both of the leg lifts, switch to repeat the same thing on the other leg. Focus on squeezing at the top of both of the leg lift positions.

• Reverse Lunge Skips – Step backwards to drop down into a Reverse Lunge. Push back up from the lunge and drive that knee upwards into a high skip. This one is great for the lower body and for bringing up the caloric burn of this routine.

How many calories does this burn?
In 26 minutes, this bodyweight cardio and toning blend burns roughly 8-13 calories a minute. That is 208-338 calories in under half an hour. These numbers have been estimated for a woman weighing 130 and a man weighing 180. Keep in mind that if you are heavier than the numbers used for calculating this range, you may expend energy at a higher rate than we have listed here.

Make sure that you cool down and stretch thoroughly after doing this workout. 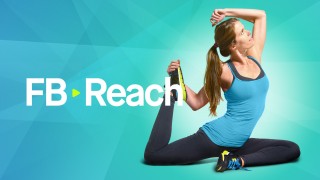 Pilates, yoga & stretching come together to create an easy-on-the-body blend. Combine with any other Fitness Blender program to accelerate gains in flexibility, tone, and range of motion. 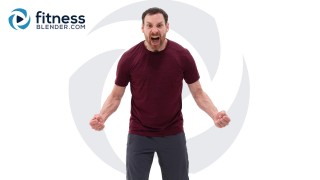 If you are looking for a challenge that will leave you sweaty and feeling spent, this is the HIIT workout for you. 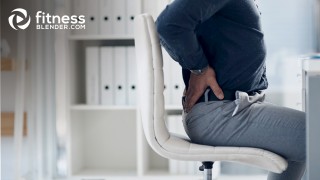 Learning About Dead Butt Syndrome and How You Can Avoid It

Learn about a condition known as Dead Butt Syndrome and steps you can take to avoid it.