On Sale! Save on FB Plus, workout programs, and more! 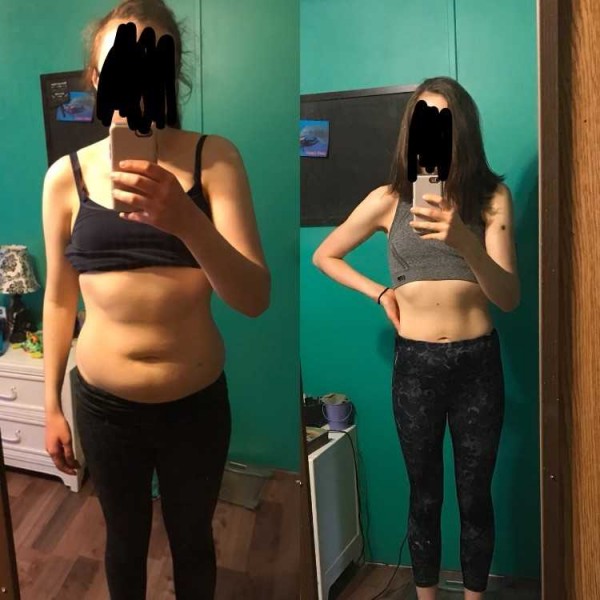 I can't really remember a time in my life where I was really happy with my body. As a child I was always really thin, with long legs and skinny arms. I was active and a fairly picky eater, oftentimes going months refusing to eat anything but the same tuna or peanut butter and fluff sandwich for lunch. As middle school and high school approached, I gained a fair bit of weight. I start to use food as a bit of a coping mechanism, something to make myself feel good. I've never really been very social or had many friends, and the addition of my parents getting divorced, my sister suffering from mental health issues, and the pressure to get good grades(put on me by myself) all made life pretty anxious and overwhelming. The only exercise I ever did was a once-a-week recreational dance class, and I often ate past fullness or when I wasn't hungry at all. I think my heaviest weight was around 170-180.

Flash-forward to February 2017, when I came down with a parasite (Giardia, specifically) that went undiagnosed until September. I was miserable. I felt sick all the time, had very little energy, and ended up missing most of the second half of my senior year of high school. My anxiety peaked, and it genuinely felt like I had no control over my life. There were tons of different foods that I refused to eat because of a fear that they would make me feel worse (gluten, sugar, tomatoes, the list goes on...), and this eventually led to me surviving off of gluten-free alternatives, homemade soup, and gatorade for about six months.

After recovering from all of this and realizing that I had already lost about 20-25 pounds, I decided to continue on this weight-loss journey in January of this year. I was excited by the prospect of having this huge "success" story, of hopefully fitting in more with my peers because I would finally "look the part." I always thought that being skinny would make me happy, would make people like me more. Having been born with a birth defect (cleft lip and palate) that caused a malformation of my lips, I've always been really self-conscious of the way I looked and how it impacted my ability to fit in. I though losing weight would cure all of this and make my life exponentially better (hint: it didn't).

My plan started off with just trying to work out once a week. I figured that all of my past attempts at becoming fit had failed because I had tried to do too much too soon, so starting off slow seemed like the best bet. Soon I found out about my now arch-nemesis calorie counting, deciding that a 1,300-1,400 limit each day was both feasible and realistic. If I could turn back now and stop myself before I started, I would do it in a heartbeat.

I randomly found a fitnessblender cardio video floating around in my recommended tab on youtube one day and decided to challenge myself. At the time it felt like 37 minutes of pure torture, but I managed to make it through and was immediately hooked. That video led to this website, and eventually to me purchasing FB30. I finished the program in the middle of May of this year, and hit my "goal" weight right around the same time. In the span of about 3 months, I had managed to lose twenty pounds. I was SO proud of myself! But then everything else kicked in...

Because I had been so preoccupied with school during this weight loss journey, the calorie counting and exercising was something I barely though about--I still did it, but it wasn't on my mind all the time. When the spring semester ended, though, everything changed. Because all I had on my plate was my part-time job, my thoughts became obsessively about food and calories. I measured everything meticulously, freaked out about going out to eat (because of unknown calories), and continued to up my workout intensity/time so I could be at a larger deficit. Even though I had reached my "goal" weight, I still felt fat and unhappy with how I looked. By the end of the summer (and still to this day) I was weighing in at 118-120 pounds, which really isn't healthy for my height of 5'7".

I'm still struggling with food, with obsessively counting calories, and with exercise addiction. There have been several times where I've been sick recently but have been so anxious and scared about gaining weight that I've forced myself to exercise despite feeling super crappy. Even though I eat healthy, my relationship with food is anything but.

I guess what I'm saying is that although the weight loss part of my journey is over, the "becoming fit" part is really just beginning. I don't consider myself to be healthy right now, and it's definitely something I need to remedy. My goals right now are to figure out how to love my body no matter what I look like or how much I weigh. I really want to get to a point where I can eat and exercise intuitively, instead of forcing myself to workout when my body just wants rest and sleep. Being fit (for me at least) means a lot more than squeezing in hour long workouts 5-6 times a week and making sure I hit macro/calorie goals each day. It's enjoying movement, eating what my body is craving (yes, even if that means ice cream or cookies!), and not trying to micromanage every little thing. I don't think you can truly be "healthy" physically if your mind isn't healthy too, and at the moment, mine definitely isn't.

I know everyone has different fitness goals and I COMPLETELY respect that! But for me I think I've just figured out that aesthetic goals are no longer worth the mental anguish to get there. I don't have abs, I don't have a big butt or boobs (in fact, mine are kind of non-existent), and I carry most of my weight in my stomach. I have stretch marks, cellulite, and a little bit of loose skin, but I also have strength, willpower, and determination. I look back at the way I used to think and seriously feel insane--why on earth would I want to "fit in" with people who would only be my friend if I looked a certain way?!

I know this has been a very long and rambly (is that even a word?) post, but I wanted to write it because it's important to me. I don't want anyone to suffer like I have. I don't want anyone to think that weight loss will bring them automatic happiness, because being content is so much more than that! Losing those last twenty pounds isn't a magic pill that'll make you love your body. You can wear a bikini, get married, go on vacation, etc, no matter what the scale says! You are worthy of love, happiness, and confidence in your body no matter the size of your clothing. Enjoying moving your body, getting the benefits of exercise without overtraining, and eating for both pleasure and health will improve your life much more than a goal weight will--especially if you have to take drastic measures to get it to it.

(I do want to mention that FitnessBlender is not the cause of my skewed relationship with food and exercise. I've always been a Type A personality, someone who's always comparing themselves with others and trying to be perfect. I genuinely believe that the principles behind FB are some of the best out there in the fitness world, and I'm so thankful to be part of a community that has such a balanced, realistic view of being healthy. I know I have my own issues, but none of them have been caused by Daniel, Kelli, or anyone in this wonderful community. I truly appreciate all the support and advice given on this page, and I'm so glad I've found you all!) 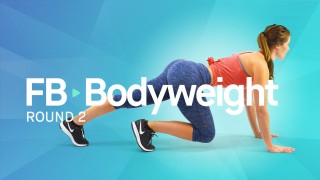 Our 4 Week Bodyweight-Only program is perfect for at home workouts; you won't need any equipment for these challenging & highly effective HIIT cardio, bodyweight strength training, Pilates and flexibility workouts. 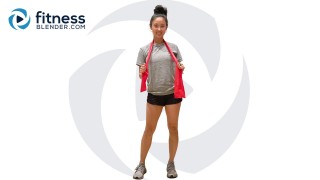 Exercises that target small, but mighty, muscles in the foot and calf to strengthen, support, and protect you during movement 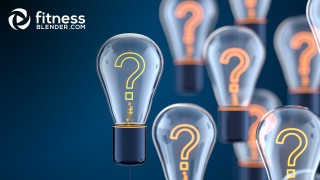