For anyone who knows, Day 15 is a 5/5 difficulty HIIT and strength combo. It comprises a lot of compound movements, which a lot of people don't like as it makes them feel like they weren't able to push as hard as normal, due to attempting to keep their balance and other focusing factors.

I really rare make these kinds of posts but I wanted to today in order to maybe help some of you out who feel like compound movements hinder your ability to really wear yourself out. How do you approach a 5/5 difficulty FB workout with compound moves, and complete it without just going through the motions? For me, the answer goes back to something I talked about in my advice for overweight beginners post.

Education. Learning about the moves you're doing, knowing exactly how they target the muscles in question, and knowing the progressions or permutations of that particular move and what they do. Just as a quick example - You are hypothetically choosing between doing Overhead tricep extensions or tricep kickbacks. What's the difference? They both do the same thing, right? Yes and no. Both are tricep moves, but target it in significantly different ways. Your tricep is made up of three heads- The lateral at the front, the long head is in the middle, and the medial head is the big meaty part at the back of your arm.

All three heads insert at the same point tendon wise on your elbow, which in effect means any exercise extending your arm at the elbow will work the tricep, period. However, the long head actually originates shoulder blade, and when you pull your arm behind yourself in full extension for a tricep kickback, that is why you feel such a hardcore stretch on the middle of your tricep. It's an important head to focus on and that exercise is great for it - of course remember to focus on the entire tricep as well.

I tend to avoid standing overhead extensions due to the fact that my left shoulder is subject to injury from internal rotation, and I tend to preform kickbacks, pushups, and pushing/lying down tricep exercises instead. This same principle comes into getting through the compound exercises.

I swapped out almost every compound move in the workout partially or entirely for a series that was easier to get myself into position to at my fitness level, but that targeted the same muscles. Lunges and an overhead extension became lunges and a tricep kickback. The way my hips insert don't really allow for a ski squat, so it just became a regular squat with a focus on pushing through my feet with a bicep curl and pushing up into a modified shoulder press which again I use to protect my shoulder and still hit the same heads of the deltoid.

The more you learn about the anatomy of your body, the more you can get out of any workout that Daniel and Kelli have to offer, and even you can make it through a 25 minute, level five workout with compound movements. I guess you could just insert the "The more you know" banner here. 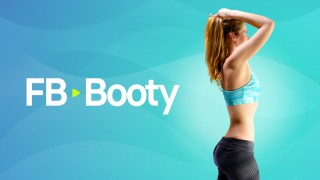 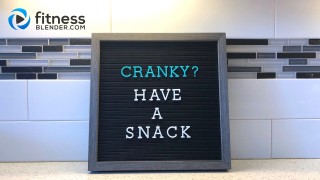 A list of our favorite healthy grab & go packaged snack foods for when life gets hectic.